Virat Kohli went past Sachin Tendulkar’s tally of 17 hundreds in ODI run-chases as India trumped West Indies in the fifth ODI at Sabina Park in Kingston, Jamaica to win the series 3-1.

Virat Kohli went past Sachin Tendulkar’s tally of 17 hundreds in ODI run-chases and attained a world record, as India trumped West Indies in the fifth ODI at Sabina Park in Kingston, Jamaica, to clinch the series 3-1. It was Kohli’s 28th ODI hundred, equalling Sanath Jayasuriya. The Indian skipper achieved the feat in his 181st ODI innings (less than half of what Jayasuriya had played). Live cricket scorecard: West Indies vs India, 5th ODI

West Indies had defended 189 at North Sound, Antigua. They scored 16 more runs today but the wicket at Jamaica’s Sabina Park was a much easier in comparison. There were early hiccups when Shikhar Dhawan fell in the final ball of the first over to Alzarri Joseph. West Indies could have strengthened the grip further had the in-form Ajinkya Rahane not been dropped off Jason Holder in the fourth over. From thereon, India had no problem whatsoever. FULL UPDATES FROM 5th ODI

Rahane added to Holder’s miseries when he smacked the West Indian skipper for 3 boundaries in the fifth over. Starting with a leg glance, he punched one off the back foot before cutting the final ball past gully for a boundary. Kohli got into the act immediately by driving Joseph for a delectable straight drive. Rahane and Kohli added 79 from 107 balls for the 2nd wicket before Rahane was trapped in the front by Devendra Bishoo for 39.

Master of chases, Kohli, guided India to a comfortable win. He found an able partner in Dinesh Karthik, who contributed 50 off 52 balls in the 122-run third-wicket stand. India have now won their seventh consecutive ODI series against West Indies.

Holder, who was brilliant with his captaincy, in the fourth ODI at North Sound took some baffling decisions. He brought in Rovman Powell to bowl only when India needed 15 to win. Surprisingly, Roston Chase too was brought into the attack with India being 9 runs away.

Earlier, Mohammed Shami registered his sixth four-for of his ODI career, as India restricted West Indies to 205 for 9. The last time Shami got wickets in ODIs was in March 2015. West Indies could not take advantage of the good batting surface after winning the toss.

Kohli lost the toss for the fifth time on a row, equalling the unwanted Indian record of Sunil Gavaskar, Sourav Ganguly and MS Dhoni, losing as many tosses in a series.

Shai Hope was the only West Indian batsman to breach the 50-run mark. West Indies were off to a brisk start courtesy Kyle Hope’s early blitz, but they could not maintain the momentum.

West Indies started well, and it was Hardik Pandya in the eighth over who got his side the breakthrough. Pandya had recently revealed that he had figured out in his short career that batsmen usually go after his bowling and he uses that as an opportunity to take wickets. The script followed. Lewis, looking to clear mid-off, found Kohli.

Umesh Yadav’s twin blows in the 16th over forced West Indies on the back foot when he sent back Kyle and Chase of consecutive deliveries.

Apart from the Hope brothers, it was Holder whose 34-ball 36 gave the innings some momentum before local boy Powell chipped in with a 32-ball 31 that took West Indies past 200.

Player of the Match: Virat Kohli

Player of the Series: Ajinkya Rahane

Suvajit Mustafi consumes cricket for lunch, fiction for dinner and munches numerous other snacks throughout the day. Yes, a jack of several trades, all Suvajit dreamt of was being India’s World Cup winning skipper but ended up being a sports writer, author, screenwriter, director, copywriter, graphic designer, sports marketer, strategist, entrepreneur, philosopher and traveller. Donning so many hats, it’s cricket which gives him the ultimate high and where he finds solace. He can be followed at @RibsGully [Twitter] and rivu7 [Facebook].
First Published on July 7, 2017 2:21 AM IST
Last updated on July 7, 2017 4:45 PM IST
TOPICS:
Ajinkya Rahane India India tour of West Indies 2017 Mohammed Shami Virat Kohli West Indies
SERIES:
India vs West Indies 2017 Match : India vs West Indies 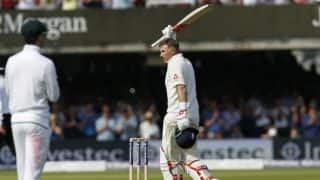 England vs South Africa: Captain Joe Root in a ‘dreamworld’ after making 184*