India and Australia are set to play 5 ODIs and 3 T20Is, starting from January 12.

Virat Kohli admitted that India’s tour of Australia in 2014 was the best period in his career so far. Although India eventually lost the 4-match Test series 0-2, he appreciated the hard fight showed by the side despite losing the first two games. He also suggested that his captaincy debut which happened in the first Test in that tour was an excellent start. “From a team’s point of view, the start is important when you want to achieve something. What we were able to do as a squad in Australia was special for me, not just the way I performed, but the whole team,” he said. FULL SCORECARD: Australia vs India, 1st ODI at Perth

According to Times of India, Kohli added, “The kind of cricket we played, it’s probably the most special time of my life till now of my career, and it will remain so. I hope we can better that.”

The Indian Test skipper also admitted to be enthusiastic about the upcoming One-Day International (ODI) and Twenty20 International (T20I) series against Australia, starting next week. The Indian team departed for Australia on Tuesday night after the annual awards organised by the Board of Control for Cricket in India (BCCI). READ: Ajinkya Rahane confident of India doing well in Australia tour 2015-16

During the ceremony where an excited Virat Kohli who bagged the Polly Umrigar Trophy for Cricketer of the Year while talking to Harsha Bhogle about their Down Under tour said, “I can’t wait. Everyone is suited up. The shoes are shining. I can’t wait to get on the plane.” India and Australia are set to play five ODIs and three T20Is with the opening match to be played at WACA, Perth.

Kohli who had a superb 2015 recalled his match-winning century against Pakistan in the ICC Cricket World Cricket Cup group stages. It was India’s opening game in the tournament and Kohli led from the front to ensure India’s record of beating Pakistan in World Cup matches remains intact.

“It was special. The game against Pakistan was also our first in the World Cup, so it was massive. We hadn’t played well in the tri-series. I remember waking up the morning of the game and doing my preparation and opening the window of my room in Adelaide, and I see this bridge which connects the ground to the hotel and saw 3,000 people there with their musical instruments and flags and what not,” Kohli said.

“It just hit me that I’ll be in the stadium in three hours playing in front of these people. I saw the frenzy there. That’s the fun of it. I challenged myself to go out there do the best I could, get big runs. I was able to do that and was happy about it,” the Indian Test skipper recalled the historic day. READ: MS Dhoni: Focus is on Australia tour, not retirement 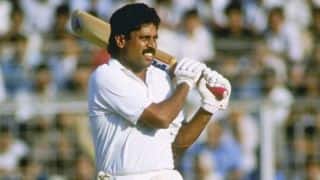