Sunil Joshi has added his voice to the growing criticism of the manner in which Karun Nair has been snubbed for the upcoming Test series vs West Indies.

Former India spinner Sunil Joshi has added his voice to the growing criticism of the manner in which Karun Nair has been snubbed for the upcoming Test series against West Indies. Middle-order batsman Nair, who failed to get a game in five Tests against England, was dropped from the 15-man squad announced on Saturday for the West Indies series.

While the likes of Hanuma Vihari, Mayank Agarwal, Rishabh Pant and Mohammed Siraj have earned maiden call-ups to the Test squad in the recent weeks, Nair, who is only the second ever Indian batsman to hit a triple-century in the format, has been repeatedly ignored.

Joshi said the Indian team management including selectors, head coach Ravi Shastri and captain Virat Kohli have to explain why they have overlooked Nair for two straight Test series without giving him a chance.

“Apart from Karun, every other players in India’s squad to England got a chance to play, whether they performed well or not,” Joshi was quoted as saying by The Times of India on Monday. “If he doesn’t get a positive feedback about him, from neither the selectors, coach or the captain, what should a player think when he is dropped from the team without playing? All the three parties owe an answer to Karun here.”

Joshi, who is currently contracted with Bangladesh Cricket Board (BCB) as their spin bowling coach, said he has nothing against Hanuma Vihari who scored a fifty on Test debut. However, he feels Nair has to communicated the reason why he was fallen off the pecking order.

“The selectors should communicate to him why he wasn’t picked in the Test series at home, or why was Vihari picked ahead of him? I’ve nothing against Vihari, but why did they try and test every player on the England tour apart from Nair? He needs to be told why he has been dropped. What’s his mistake?” he said.

Joshi, who represented India in 15 Tests and 69 ODIs, added instead of selecting first-choice players for the Windies Tests, they should have been sent to Australia to prepare for the tour. “I wonder why are India playing their top players in this series? It would have been a better idea to send your best players 15 days earlier to Australia to help them acclimatize to the conditions there faster,” he said. 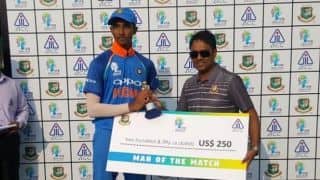