Virat Kohli described their 337-run win at Ferozshah Kotla here as the most special of the four-Test series against South Africa.

New Delhi: India captain Virat Kohli described their 337-run win at Ferozshah Kotla here as the most special of the four-Test series against South Africa, saying his team had to work harder to achieve the result as compared to the previous matches. India won the four-Test series 3-0, with the second match at Bangalore being washed out. While India won the first and third matches within three days, the last Test here went on till the fifth day with South Africa putting up a massive resistance for the major part of the match. “All the wins were special, but this one is more because we had to work harder. The South African batsmen put their heads down and played for the draw, always hard work. I just asked the bowlers to put their hands up and that’s what happened after tea,” said Kohli at the post-match presentation ceremony. Full Cricket Scorecard: India vs South Africa 2015 4th Test at Delhi

“We were surprised with how they were defending, their approach. The bowlers did not lose patience. They can be really proud of their effort today. This is what Test cricket is all about … patience. This really depends on how much energy the team is showing, standing on my own I can’t do anything, all 11 guys deserve the credit,” he added. Kohli said it was important to back the bowlers. India move to No. 2 in ICC Test rankings following series win vs South Africa

“We have bowlers who have the pace, it is important to back them on any surface. It is important to give them confidence at the right times and they have to respond as well and that they did,” he insisted. Delhi boy Kohli thanked the fans for coming out in huge numbers and supporting the team on all five days. “I just want to thank the crowd, it has been tremendous playing in front of a packed stadium. Thank you for all your support,” said Kohli.

Twin centurion of this Test, Ajinkya Rahane bagged the Man of the match award for his efforts and said he backed himself to do well. “I was focussed and determined. I backed myself to take my chances. I always like to improve my game, my cricketing skills. I believe in the process because I know the results will follow automatically,” he said. Asked about his two centuries in two innings, Rahane said, “Really enjoyed that. Really happy for myself and my team.”

The Man of the series, Ravichandra Ashwin, who took 31 wickets in the series and also scored some valuable runs, said winning this Test was a fitting finale to a wonderful series. “I think it is a great feeling, a fitting finale to a wonderful series. We were going for it, we fought really hard. They (SA) dug in really deep.” Ashwin said he got huge support from Ravindra Jadeja at the other end.

“There’s not much bounce. I got massive support from Jadeja, he hits the stumps so often. It was an amazing support from me, and let’s not forget Umesh (Yadav), who also bowled very well today,” he said. Meanwhile, South Africa skipper Hashim Amla applauded his players’ efforts for putting up a fight in the last Test at Kotla. “We knew we had to bat long and hard, we tried our exceptional best. AB [de Villiers] had a fantastic effort. You got to do what is best for the team, it is easy to go out there and get some runs, but we tried to take it as deep as possible, get something from this game.

“I am happy that the guys fought hard. Unfortunately, we were outplayed by India throughout the series, they batted and bowled better than us,” said Amla. He, however, said that his batsmen failed during the Test series. “Winning the T20s and the ODIs was brilliant. As a whole, we managed to have some success. It was a good learning experience for the youngsters in the team. Test series was tough for our batsmen, we didn’t get enough runs. Credit to our seamers on these pitches, just unfortunate we couldn’t get the runs to back them up,” said Amla. 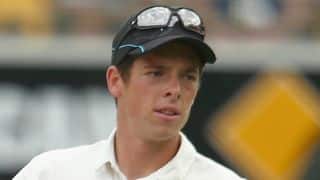