This is the second quarter-final of ODI GOAT contest.

Virat Kohli, India‘s star batsman and former Sri Lankan destructive opener Sanath Jayasuriya will battle it out in the ongoing ODI GOAT contest. The GOAT contest is an acronym for Greatest of All Time. In this method adopted by Cricket Australia, they are pitting down ODI greats against each other to finally arrive at the finest ODI cricketer since the inception of this format of the sport. The contest is entering its climax, and this is the quarter-final. Voting will determine the outcome of this clash between these two greats of the game. Both Jayasuriya and Kohli are widely considered as one of the finest ODI players of all time. READ: Sachin Tendulkar beats Viv Richards in quarter-final of ODI GOAT contest

As per Cricket Australia’s official website, Jayasuriya revolutionised cricket during his time. When a slow and steady start was considered as an ideal beginning to the innings during mid 1990s, Jayasuriya gave a new dimension to opening with his aggressive stroke play. He was the most destructive batsman in ICC Cricket World Cup 1996. There are very less players who dominated ODI cricket (before his arrival) in the manner he did. READ: Warne pips Muralitharan in ODI GOAT contest

Virat Kohli, on the other hand is a complete batman. In contemporary cricket, he is arguably the best along with AB de Villiers if we take into account good performances against international teams in all formats of the game. Kohli might be not as lethal as de Villiers, but he is particularly brilliant in taking his side to victory and certainly better when it comes to chasing. It appears that while chasing, there are very few players who can match Kohli. It will be interesting to witness who among these two giants (i.e. Kohli or Jayasuriya) of 50-over cricket wins this battle. 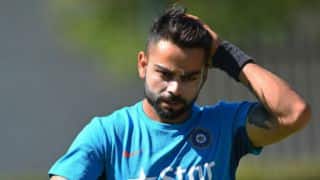