Anil Kumble was appointed as the Indian coach for a term of 1 year by the BCCI on Thursday.

Virat Kohli on Thursday congratulated and welcomed India’s new head coach Anil Kumble on Twitter. The India Test Captain, who will be leading India in the Test series against West Indies starting July 21, said that he was looking forward to working with the former India spinner. Kohli, who has played alongside Kumble in the past in the IPL for Royal Challengers Bangalore (RCB) said that there were great things in store for Indian cricket now after his appointment. Kohli was not the only one who congratulated Kumble. Indian opener Shikhar Dhawan also wished him and hoped for a positive long season ahead. ALSO READ: Anil Kumble appointed Indian cricket team’s head coach

Heartiest welcome to @anilkumble1074 Sir. Look forward to your tenure with us. Great things in store for Indian Cricket with you

Jumbo news 4Team India.Congrats @anilkumble1074
To have a coach who cud play wid broken jaw wud be an inspiration fr guys in dressing room.

With 619 Test scalps, the 45-year-old Kumble is the highest Indian and third highest after Muttiah Muratharan and Shane Warne in the all-time wicket-takers list.

Kumble, who spearheaded the Indian bowling attack for more than a decade, mentored Royal Challengers Bangalore (RCB) and Mumbai Indians in the Indian Premier League (IPL) and was also the chairman of the National Cricket Academy (NCA)and BCCI’s Technical Committee. 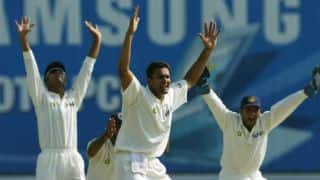 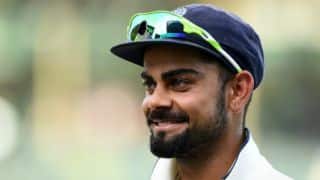 Virat Kohli spends a day with his fans in Gurgaon