On Sunday, all eyes will be on the ICC Champions Trophy final between India and Pakistan at The Oval in London.

London: On Sunday while all eyes will be on the ICC Champions Trophy final between India and Pakistan at The Oval, a few kilometers away at the Lee Valley Hockey and Tennis Centre, the arch-rivals will be seen battling it out in a Group stage ongoing Hockey World League (HWL) Semi Final. Cricket captain Virat Kohli, who is leading the men-in-blue for the first time in a major International Cricket Council (ICC) tournament, wished his hockey counterparts the best ahead of the marquee clash. Addressing the pre-match press conference, Kohli said he had never tried his hand at hockey but is confident that the Indian team will come out with flying colours. FULL CRICKET SCORECARD: India vs Pakistan, ICC Champions Trophy 2017 Final at The Oval

“I wish our hockey team all the best. I have never tried my hand in it but they are pretty good, so they will be fine,” Kohli said. Applauding the hockey stars for their guts, the 28-year-old cricketer also revealed his fear of getting hit on the face in a hockey match. “I played with synthetic hockey balls in indoors but never tried [field] hockey. I feel its very scary. Getting hit on the face, I don’t know how those guys do it from the penalty corner. It needs a lot of guts to do that,” he said. ICC CT 2017 Final: Kohli hints at unchanged playing XI vs PAK

The Indian cricket team will head into Sunday’s final against Pakistan as the defending champions, having won the title in 2013. 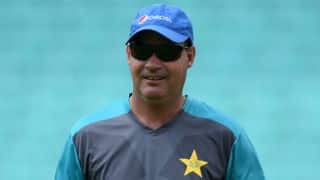