The former England captain believes that Kohli telling the ICC not to tinker with Test cricket augurs well.

The inexorable rise of Twenty20 cricket has sparked fears that the Test format is in serious jeopardy — but the longest form of the game has a powerful advocate in India captain Virat Kohli.

The popularity of quick-fire T20 matches can be seen most starkly in the Indian Premier League, where players earn vast sums of money playing in front of packed houses. Tests by contrast – outside England and Australia – are often played in front of sparse crowds in big, echoing arenas.

But former England captain David Gower said comments made by Kohli, the world’s top-rated batsman, during India’s 4-1 Test series loss in England this year, are significant.

“We had a fantastic series against India, closer than the margin suggests,” said Gower, one of the leading Test batsmen of his era, during the inaugural Ranji Memorial Public Conversation on Cricket in London. “It is a reflection of the balance of power if Virat says that — you’ve got a lot of people who will listen,” explained Gower, who said the introduction of a World Test Championship from next year will help provide greater context for matches.

Kohli insisted Test cricket was the “most beautiful format of the game” despite the razzmatazz and hype around the shorter formats. And no one should doubt what it would mean to Kohli were he to lead India to their inaugural Test-series win in Australia during an upcoming four-match campaign.

He is, though, against matches in the 141-year-old format being reduced to a maximum of four days from five to make them more attractive – England are playing a four-day match against Test newcomers Ireland in July.

India are the undisputed financial powerhouse of world cricket, with an audience of more than a billion people providing huge commercial and broadcast revenues. Tours by India boost opponents’ bank balances, allowing home boards to sell TV rights to the lucrative subcontinental market.

Former India wicketkeeper Farokh Engineer said the Board of Control for Cricket in India had been “blinded” by Twenty20 to the detriment of an overall vision. “India have been sort of blinded by the T20, the IPL,” said Engineer, speaking alongside Gower. “Your first priority is to play for your country and then the riches will come automatically.”

That Engineer played 46 Tests in just over 13 years while recently retired England batsman Alastair Cook made 161 Test appearances in 12-and-a-half years is an indication of just how congested the international calendar has become. Engineer’s fellow panel member Mushtaq Mohammad said it was crucial to make Test cricket affordable and that spectators risked being priced out of the game.

“If you want Test cricket to survive you’ve got to reduce the entrance fee. Open the gates, let the people come in, make it affordable.”

As for the recent innovation of day-night Tests, the former Pakistan batsman added: “In Southeast Asia we’ve got the right weather for day-night cricket but don’t reduce it (Test cricket).”

Test cricket has suffered a marked decline in the West Indies, who dominated Test cricket from the late 1970s until the early 1990s, playing with a crowd-pleasing swagger. Gower said reviving five-day interest in the Caribbean was no easy task despite a significant cash injection from the International Cricket Council.

Of some consolation to traditionalists is that the debate is nothing new, with Test cricket still alive and kicking. “In this ultra-modern age, counter-attractions have multiplied many times….They (young people) just haven’t the time to devote to cricket or is it they just can’t be bothered to dash home to tea, then to the local cricket ground?”

It might sound like a contemporary lament, but those words were written by England great Herbert Sutcliffe after his country’s 1950-51 Ashes Test series loss in Australia. 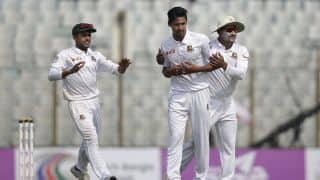