As UNICEF's Celebrity Champion, Virender Sehwag lends his voice to ensure the right of every child to health, education, equality and protection.

New Delhi: UNICEF has recently launched the #babiesneedyou campaign to put a spotlight on the cause of routine immunisation as more than 400,000 babies succumb to vaccine preventable diseases every year in India. This campaign, which urges parents and citizens alike to prioritize vaccination, lends active support to Mission Indradhanush, an initiative by the Government of India and its partners UNICEF and WHO that aims to immunise all children against seven fatal diseases, diphtheria, whooping cough, tetanus, polio, tuberculosis, measles and hepatitis B, by the year 2020.

As an extension of the above movement, UNICEF launched the ‘Ek Star Aisa Bhi’ campaign with the former captain of the Indian cricket team, Virender Sehwag, enthusiastically taking up this relevant cause . The series comprises of four inspiring videos that celebrate the pivotal contribution of multiple change-makers who donate their time and effort towards the success of the Routine Immunisation movement in India. The end is nigh for Virender Sehwag

Each video contains a monologue by Virender Sehwag, acclaiming the ‘Stars’ of the world’s largest Routine Immunisation programme. In the very first video he highlights the story of Pooranchandra, an auto-driver who collects vaccines from the cold chain centre in his Teekakaran Express before setting off to support the immunisation mission machinery. Acknowledging Pooran’s endeavours in the field of establishing an efficient vaccine delivery system for immunisation of children, Sehwag says, “Some people dream big, while others give everything they have got to achieve their dreams. They become our stars”. As UNICEF’s Celebrity Champion, Virender Sehwag lends his voice to ensure the right of every child to health, education, equality and protection. 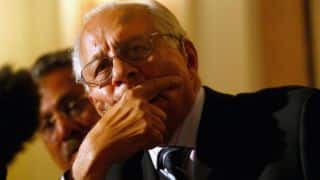