There is no escaping Virender Sehwag. He has taken the social media world by a storm with his antics and wit.

There is no escaping Virender Sehwag. He has taken the social media world by a storm with his antics and wit. Several luminaries have been a victim of Sehwagism and it seems the phenomenon will not stop anytime soon. The former Indian batsmen has now found new targets in cricket greats Sourav Ganguly and Shane Warne. These gentlemen partly have themselves to blame. Sehwag s camera caught them taking a nap during their hectic commentary schedule. That was not all, he also shared a witty message: The future is shaped by one s dreams. These legends still don t waste time in following their dreams. Sone ka Maza.

Most fans were surprised by the fact that Ganguly was in fact taking a nap in the carpet. Something unexpected of a former Indian captain, who has a nickname, Maharaja. Sehwag, Ganguly and Warne are a part of the illustrious commentary team for the ongoing ICC Champions Trophy 2017 in England. In the early 2000s the trio have played cricket together when Ganguly was India s captain and Sehwag his key batter have provided several nightmarish moments to Warne, who is regarded as the finest leg-spinner and the most astute cricketing brains ever. Warne retired from international cricket in 2007, while Ganguly followed suit in 2008 and Sehwag in 2015. ALSO READ: Virender Sehwag applies for Team India coach

The trio played together as recently as November 2015 in the Cricket All-Stars in the United States where other retired stars participated as well. Ganguly and Sehwag played under Sachin Tendulkar s leadership while Warne led the opposition unit. Warne had the last laugh, clinching the series 3-0. The three seem to be having a gala time in England at the moment.

Ganguly and Sehwag are ecstatic over India s victory against Pakistan in their opening tie of the tournament at Edgbaston on Sunday, while Warne will particularly not be pleased with how Australia began theirs at the same venue. In a rain-effected tie, the struggling Aussies managed a point due to no result against a spirited New Zealand side, who will be feeling that they were robbed of a win. Earlier in the day, Sehwag had tweeted on World Environment Day.

To celebrate every occasion in our lives,it will be wonderful if we can plant a tree.In healing earth,we heal ourselves#WorldEnvironmentDay

A sane tweet finally after he stirred a storm in social media earlier this month by tweeting controversially on the Paris Climate Agreement. He was pilloried on social media for the same. He had tweeted: Global warning ho rahi hogi US mein. Traffic and congestions se India ke pollution par kya farak padta hai! Concentrate on real issues! (Global warming might be happening in the US. What difference does pollution due to traffic and congestion make in India?) 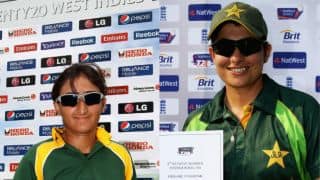 ICC Women’s World Cup 2017: This Pakistan side is a much-improved unit