The complex was earlier known as Bhopal Ground as the land on which it is located was donated to the university by Pataudi’s mother Sajida Sultan, the Begum of Bhopal. Speaking on the occasion, Sharmila said, “I have no doubt Tiger would have said ‘put the sports first and foremost at the centre of every decision you take’.” Prof. Talat Ahmad talked about the contribution made by Pataudi to cricket and said he was one of the most successful captain India has seen until now. READ: MAK Pataudi Memorial Lecture to be held in Kolkata on October 19

While expressing his gratitude for the honour, Sehwag who had graduated from the University in 2001-02, remembered his days in the university and asked the students to take interest in sports. Pataudi played in 46 Test matches for India between 1961 and 1975, scoring 2,793 runs at an average of 34.91, including 6 Test centuries. He captained the Indian side in 40 of his 46 matches. His most memorable victories included India’s first ever overseas Test win, against New Zealand in 1968. READ: Rahul Dravid says small town cricketers have more hunger to perform

Sehwag, on the other hand, played his first one-dayer in 1999 and joined the Indian Test Team in 2001. He scored 8586 Test runs, while piling 8273 runs in ODIs. The newly named Sports Complex has indoor games facilities, a cricket ground, football field, basketball and lawn tennis courts. Ranji Trophy matches are a regular feature at the cricket ground. 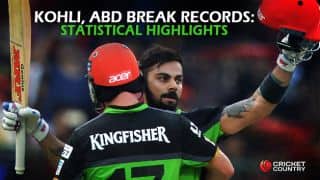