In his first game in English domestic cricket, AB de Villiers wowed fans at Lord’s on the opening day of the Vitality T20 Blast by hitting an unbeaten 88 off 43 balls to take Middlesex to a seven-wicket win over Essex.

The former South Africa captain belted five fours and six sixes on his Middlesex debut in front of a full house at Lord’s as England’s domestic T20 competition began. In addition to his stroke-filled innings, de Villiers was also part of a superb relay catch on the boundary.

Chasing 165 after Essex captain Ryan ten Doeschate hit 74 not out, Middlesex were 39/2 before de Villiers paired with his skipper Dawid Malan (43 off 34 balls) to put on 105 for the third wicket.

De Villiers, who retired from international cricket in 2018, is available for Middlesex’s first seven group games.

Elsewhere in the T20 Blast, England’s World Cup winner Moeen Ali claimed 4/18 for defending champions Worcestershire as they beat Nottinghamshire, and Somerset beat Glamorgan by eight wickets on the back of Tom Banton’s 34-ball 64 and his opening stand of 98 with Pakistan’s Babar Azam.

Worcestershire pulled their way to 161/6 in 20 overs without a single half-century, with 23-year-old Ed Barnard’s unbeaten 42 off 19 balls proving the best score. Defending that, the team found lift from Moeen who helped trigger Notts’ collapse to 133/9.

At Sophia Gardens, chasing 181 after Colin Ingram hit 26 off the final over of Glamorgan’s innings, Somerset were powered by Banton and Babar (35 off 23) before James Hildreth (24* off 21) and Peter Trego (47* from 31) finished the chase in 18 overs. 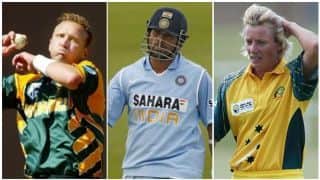