With a six-wicket win, Middlesex also registered a place in the quarterfinals of the Vitality T20 Blast.

Chasing 227, Middlesex won the match by three overs to spare, with England’s World Cup-winning captain hammering 83 not out off 29 balls, with the help of five fours and eight sixes.

Batting first, Somerset scored 226 on the back of Tom Abell’s unbeaten 101 off 47 balls. Tom Banton and Edward Byrom scored 62 off 39 balls and 44 off 20 balls respectively.

Middlesex needed a brisk start in the chase and Dawid Malan and Paul Stirling did exactly that. While the former scored a brisk 41 off 14 balls, the latter chipped in with 25 off 10 balls. The two though got out in space of two balls after powering Middlesex to 67 off four overs.

AB de Villiers and Mohammad Hafeez then joined forces and added 44 runs in 4.4 overs before the former Pakistan skipper was run-out for 18. Ex-South Africa captain was the next man to get out after Max Waller took a stunning one-handed catch in the deep, with Middlesex at 128/4 after 10.2 overs.

From thereon, it was the Morgan show. England’s limited-overs skipper, who had set a world record for sixes in an ODI during the recently-concluded World Cup 2019, took apart the Somerset bowling attack, with George Scott chipping in with an unbeaten 22 off 18 balls.

The pair of Morgan and Scott shared an unbeaten 99-run stand off 40 balls to help their team a seal a place in the quarterfinal at the expense of their opponents. 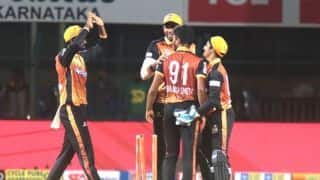