Viv Richards on Wednesday paid rich tributes to Brian Close, the England captain who passed away on September 14.

Former West Indies cricketer Viv Richards on Wednesday paid rich tributes to Brian Close, the England captain who passed away on September 14 at the age of 84. Close was a contemporary as well as a ‘mentor’ to Richards, and the West Indies’ legend said in a series of tweets that the former cricketer will be missed dearly. Close played 22 Tests for England, and captained them in seven of them. The left-handed batsman was considered one of the bravest cricketers — his demise sparked a world wide remembrance of how extraordinarily talented he was as a close-in fielder, and as well as a batsman while taking on some of the fiercest bowlers of his era. Close played only three One-Day Internationals (ODIs) for England, wherein he had a forgettable outing as he could manage only 49 runs from them. ALSO READ: Brian Close — controversial, curious composite of unfulfilled promises

In a series of tweets, Richards said on Wednesday that Close will be remembered and missed by all. Richards tweeted, “I offer heartfelt condolences to the family of my dear friend & mentor BRIAN CLOSE who has passed away. Brian had a positive influence on my early life as a cricketer and I found him to be a man of immense courage & strong character. His influence on me reached beyond the cricket field. He was loved and respected by many and we will all miss him dearly. Respectfully Sir Vivian Richards.” (sic)

Close is also considered among Yorkshire legends. The County side was quoted as saying by the Guardian, “It is with the deepest regret that Yorkshire County Cricket Club announce the death of Brian Close, CBE, one of Yorkshire and England’s greatest ever captains and one of the game’s most courageous players. In addition to his outstanding cricket career, Brian remained fully committed to Yorkshire until the end, being a life member of the club and president from 2008-10. He was also a popular former president of the Yorkshire CCC Players’ Association. He leaves a widow, Vivienne, and a son and a daughter.” READ: Aging John Edrich and Brian Close show exemplary courage against frightening West Indies attack 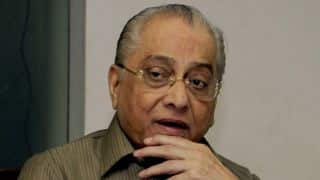