Wahab Riaz refused to talk more about the incident but urged people not to get any inspiration from it.

Karachi: Pakistan pace bowler Wahab Riaz has requested his country’s youth to refrain from taking inspiration from a brawl that took place with his teammate Ahmed Shehzad in their Pakistan Super League match on Sunday. Speaking to a local TV channel, the left-arm bowler refused to talk more about the incident but urged people not to get any inspiration from what happened during the match, the Dawn reported. Riaz and Shehzad were fined 40 per cent and 30 per cent of their match fees after being found guilty of making ‘inappropriate and deliberate physical contact’. A fierce war of words was exchanged between both the players after Quetta Gladiators opener Shehzad was clean bowled by Peshawar Zalmi’s Riaz, who was clobbered for a six by the batsman earlier in the fifth over. VIDEO: Ahmed Shehzad and Wahab Riaz on-field fight during PSL 2016

A charged-up Wahab was then seen provoking Shehzad by passing ‘inappropriate’ comments, to which the batsman reacted by colliding with the bowler. However, the scuffle was neutralised on the spot. Earlier, Riaz and Shehzad were heavily fined and given a warning by the Pakistan Cricket Board (PCB) for a heated on-field altercation during a PSL match in the UAE. The incident happened in the fifth over of the match between Quetta Gladiators and Peshawar Zalmi when the two Pakistani players pushed each other and exchanged harsh words. While Shehzad was fined 30 per cent of his match fee, Riaz was penalised 40 per cent of his game earnings by match referee Roshan Mahanama. A PCB official had said, The players have been asked to behave as such incidents hampers the image of Pakistan cricket as millions are watching the PSL around the globe.” 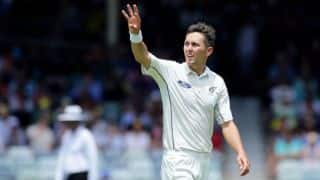