Misbah and Waqar are seen as the front runners to be appointed head coach and bowling coach.

Former Pakistan captain and fast bowler Waqar Younis appears set to be appointed as the new bowling coach of the national team after the five-member panel of the Pakistan Cricket Board (PCB) began interviews of the candidates on Thursday.

Waqar’s chances of being named bowling coach appeared strong after another former Test bowler Mohammad Akram withdrew his application while the PCB panel, headed by Intikhab Alam, did not invite another former Test pacer Jalaluddin for the interview process.

Jalaluddin, who is a qualified level four coach, was obviously not happy with the treatment meted out to him and said while it was PCB’s prerogative to appoint anyone they wanted but he met all the qualifications asked for by the Board for the bowling coach’s position.

“If they treat their master coaches like this and ignore and disgrace them, then Pakistan cricket will not move ahead,” Jalaluddin told reporters in Karachi.

The PCB’s panel also began interviewing of candidates for the position of head coach.

The interviews for batting coach, fielding coach, fitness and conditioning trainer would be held later and appointments will be made with the consent of the new head coach of the national team.

Mohsin, who has also remained chief selector in the past, was Pakistan’s interim head coach in 2011 and 2012 and the team won three straight Test series under him, including a 3-0 whitewash of England in the UAE.

The PCB later unceremoniously removed him as head coach to bring in Australian coach Dav Whatmore in 2012.

Mohsin has also coached the Pakistan junior and A teams in the past. Surprisingly, neither Misbah nor Dean Jones has any prior coaching experience although the PCB has asked for three years experience in the conditions set out for interested candidates.

Misbah and Waqar are seen as the front runners to be appointed head coach and bowling coach after the PCB did not renew contracts of Mickey Arthur and his support staff after Pakistan failed to reach the semi-finals the World Cup in the UK.

Waqar was ironically replaced as head coach of the national team in 2016 by Arthur. Former West Indian fast bowler Courtney Walsh is also said to have applied for the position of head coach. 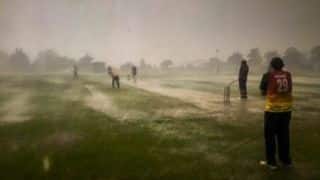