A source said Peter Moores is a front runner for the job.

Karachi: Several top foreigners have applied for the post of Pakistan team’s head coach after the deadline given by the PCB ended yesterday. A reliable source in the PCB told PTI today that England’s Peter Moores, South African Mickey Arthur and Australians Dean Jones, Tom Moody and Jamie Siddons were among the foreign candidates to have applied for the position. “Moores is a front runner for the job as he has in the past also interacted with the PCB and had given an impressive report on how to improve the cricket structure,” the source said. Live Cricket Scorecard: Sunrisers Hyderabad vs Rising Pune Supergiants, IPL 2016, Match 22 at Hyderabad

Moore, 53, was sacked as England’s coach last year in May after a disastrous World Cup and poor Test results on a winter tour to Australia. The former English county cricketer also had an earlier stint as head coach of the English team in 2007-2008 before being removed in early 2009 by the England and Wales cricket board. The source said some former Test players from Pakistan had also applied for the coach’s position. READ: Pakistan aspiring to host West Indies in day-night Test

The PCB has included former stalwarts, Wasim Akram and Ramiz Raja, on its coaching committee to review and shortlist the list of candidates who have applied and recommend names to the board. The PCB has told Zimbabwean Grant Flower to continue as batting coach until September but the source said his extension will depend on the new head coach. 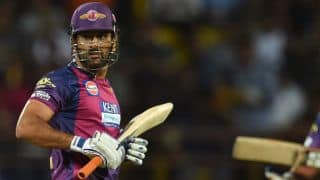