Finch took a step closer to a fairytale Test debut with 54 off 91 balls, while brothers Shaun and Mitchell Marsh also scored unbeaten half-centuries.

Aaron Finch celebrated his inclusion in Australia s squad for the two-Test series against Pakistan by striking a half-century against Pakistan A in the warm-up game at the ICC academy in Dubai. After Nathan Lyon had troubled Pakistan A with 8/103, Finch was among the three batsmen to score half-centuries as Australia A bossed their opponents by closing the second day at 207 for 2, trailing by 71 runs.

Finch took a step closer to a fairytale Test debut with 54 off 91 balls, while brothers Shaun and Mitchell Marsh also scored unbeaten half-centuries.

Ever since he made his ODI debut in 2013 against Sri Lanka at Melbourne, Australia batsman Aaron Finch has been phenomenal in white ball cricket. In ODIs, Finch, who has played 93 matches, averages 38.19, while in the T20I, he averages 45.60 in 42 matches, but his real test begins now as he gears up for his Test debut. The first Test between Australia and Pakistan begins on October 7 and Finch added the half-century has settled him ahead of receiving a baggy green.

“It was nice to get out in the middle after training away for the best part of a week and doing the hard yards. It was good to finally get out in the middle,” he said. “It’s pretty similar, to be honest. It’s still about playing my natural game which is quite aggressive generally.”

Finch cracked seven boundaries during his 91-ball stay and looked composed against an attack comprising the likes of Rahat Ali and Wahab Riaz. But his tackling of spinner Iftikhar Ahmed is what stood out, something that is bound to bode well before facing the challenge of Yasir Shah once the Test series starts.

“In these kinds of conditions, if you go nowhere and the scoreboard stands still for a long time, you can be a sitting duck. There are some world-class (bowlers),” said Finch. “It’s still about playing my natural game, there will be an opportunity to taper that slightly with the conditions and with the wicket. You have to pick your moments and pick your bowlers, pick your balls and just to do it for as long as you can.” 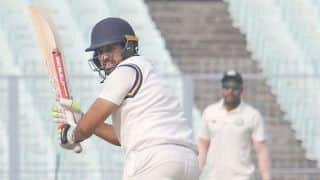 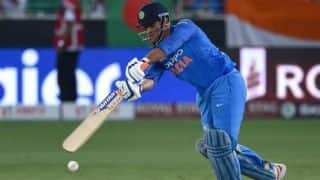