Former Pakistan captain Wasim Akram has ridiculed Shoaib Akhtar and his controversial autobiography, which has made several tall claims, saying that the pacer was a "problem" when he was an active player and remains just that even in retirement. 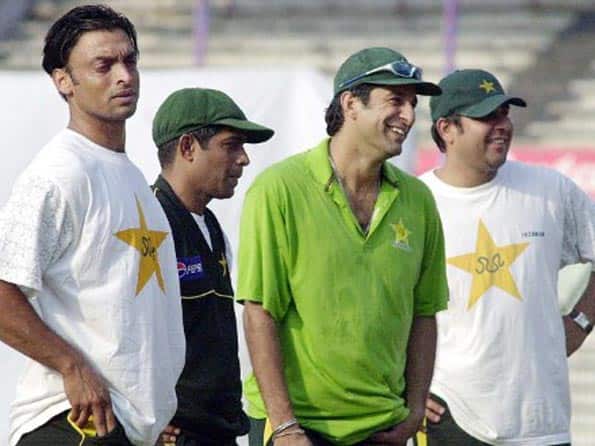 Wasim Akram (R) said Shoaib Akthar was just trying to sell his book with tall claims and also rejected allegations that he tried to destroy the tearaway pacer’s career. AFP

Former Pakistan captain Wasim Akram today ridiculed Shoaib Akhtar and his controversial autobiography, which has made several tall claims, saying the pacer was a “problem” when he was an active player and remains just that even in retirement.

Akram pooh-poohed Shoaib’s claims of making Sachin Tendulkar uncomfortable with his pace in the Faisalabad Test in 2006 and also rejected some of the other allegations he has made in the book titled Controversially Yours.

“I remember Sachin’s one innings when he was 16 and touring Pakistan. Sialkot Test was Sachin’s 4th Test. He made his debut in that series. There was a lot of grass on the pitch. Waqar and I bowled very fast. Waqar, I think, was 19 and Sachin was 16.

“Waqar hit him (Sachin) on the helmet just below the chin and he got hurt. But he put a plaster and he came back to score a 50. If a 16-year-old kid wasn’t scared, I don’t think any of the top batsmen in the world is scared of any bowler,” Akram told reporters on the sidelines of International Sports Summit here.

“Maybe he might play on the back foot to block the delivery or maybe he might just see it off. But I don’t think a player like Sachin can get scared of any bowler. He (Shoaib) can write anything to sell a book, but it does not affect me or Sachin,” the former left-arm paceman maintained.

“Whatever PCB (Pakistan Cricket Board) has told the press I agree with that. I am with PCB (on Shoaib). They have said about Shoaib being a problem when he was in team and even now when he is not in the team,” stated Akram, one of the most successful Pakistani cricketers of all time.

“I was the one who made him (Shoaib) play. But I don’t want to go to his level. There is an unwritten contract for sportsmen that you do not tell the personal details of others to the press. So some people are different. I am different from him. It does not bother me. He can go on saying whatever he wants,” the 45-year-old former speedster said.

“There is no point in me talking about his book. I still haven’t read his book. But his idea is good. If the books get sold then good luck to him,” said Akram, adding, “You people (media) will ensure his book is a bestseller.”

On India’s disastrous tour of England, the sultan of swing said while the team’s batting failures could be blamed on injuries, not playing rookie pacer Varun Aaron, who has done well in the Emerging Players series Down Under, was inexcusable.

“Indian bowling struggled during the England tour. I was commentating throughout the series. In batting there were a lot of injuries and rightly so because Indian team is a human team. They were playing for a long time. Fair enough.

“In bowling if you see, a youngster like Varun Aaron, who I think is ready to play for India, was sitting out throughout the tour. But you did not play him for the five (ODI) matches.

You groom a bowler. If you give him a chance against England in India, then there is a flat wicket over here. He will get hit and his confidence will get affected. He did well against Australia with the Emerging side (India A).”

“Jaidev (Unadkat) is there, Umesh Yadav… are other young bowlers who have some pace. There are two-three more bowlers. I will talk about them when they start playing. The idea is to play them,” Akram said.

“You can’t have them playing for just 3-4 seasons.

They will retire after three seasons after bowling on these slow wickets. So the idea is to play them when they have the pace and energy in them,” Akram said.

The former paceman, who has taken 414 Test and 501 ODI wickets, said Indian bowlers themselves were responsible for losing pace soon after debut.

“I have travelled with the Indian cricket team and have tried to improve their game. A lot of them ask me why they lose pace. I think the player himself is responsible for that.

“If I am a 25-year old bowler, then I should know that a year ago I was bowling at 145 kmph and now it is 125 kmph. I have to think what is it that I am doing wrong. Cricket is a simple game but people (foreign coaches) who have come from outside have complicated things,” Akram said.

“The more you bowl the better you get. The more you bowl in the nets, the stronger your fast bowling muscles get and your pace increases. Now there is a new system that a bowler cannot bowl more than two overs (in the nets). If you bowl for two overs in nets and spend two hours in the gym, the muscles will improve not your bowling,” he added.

Stating that the Indian bowling attack relied heavily on left-arm pacer Zaheer Khan, Akram said the team will have to get used to doing well without him.”There is too much over-dependence on some bowlers.

“I used to go to Richard Hadlee, Ian Botham, Kapil Dev, and ask them how to inswing and outswing. You have to create awareness on your own. You will not learn anything sitting in a room,” he added.(PTI)