It was a fitting moment when James Anderson bowled Mohammed Shami to take the last wicket of the series, thus sealing a 118-run win over India on day five at Kia Oval to give Joe Root s team the series 4-1.

On day four, Anderson had taken two wickets in two overs without conceding a run, thus drawing himself level on Glenn McGrath s record of 563 Test wickets. He had to bowl a further 20.3 to get the record that put him in a league of his own, getting Shami to move to 564 wickets – the most by a fast bowler in Test history.

Holding back tears as he spoke to Sky Sports moments after making history, Anderson said: “I’m so happy that Cooky was on the field to see that final wicket. It’s been a tough week. I’m just happy to win the game. I wasn’t even thinking about the record. When India were building that partnership it was looking like they were going to get close.

“But I got into a good rhythm and thankfully Root let me take the new ball eventually and give me a chance to take that wicket. Cook is my best mate and it’s been brilliant just to have him there for me all the time.

“It will take a while to sink in. Cookie retiring has been a big thing for me I m trying not to cry. It s been a special achievement for me. It s not something I ve aimed for. I ve just enjoyed playing for England it s an amazing job, he said.

“When we come into series like this, there s always a question mark over bowlers aged 35. That s my main focus. I feel fresh considering how many overs I ve bowled. I m enjoying playing. As long as that continues, I ll carry on playing as long as I can.

That was as far as Anderson could get, before he excused himself and headed indoors to join his team-mates.

England next play Tests in December in Sri Lanka. Whether Anderson tours or not remains to be seen, but for now the 36-year-old can take time off to savour England s series win and the fact that he has made history. 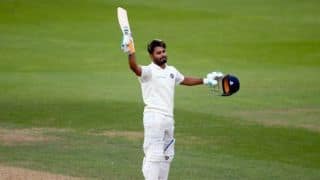