Adam Zampa also praised the Indian fans who are always great to the Australians, and is one of the reasons which makes traveling to India a hard job.

Australia made a strong comeback in the ongoing T20 International series against India. After losing the first match at Ranchi, they came back strongly to win at the Barsapara Cricket Stadium in Guwahati on Tuesday, levelling the series 1-1. However, as they were on their way back to the team hotel, a rock was hurled at the Australian team bus, breaking a window shield. In the wake of this incident, Adam Zampa expressed his disappointment over the issue. However, he praised the general Indian fans, who are typically genial to the Australians. FULL CRICKET SCORECARD: India vs Australia 2017, 2nd T20I at Guwahati

In a video posted by Cricket Australia, Zampa said, I had my headphones on quite loud and was looking towards the other side of the bus. I just heard this loud bang. It was pretty scary for five seconds or so. Our security guard mentioned quite quickly that it might have been a rock. It was a pretty scary incident. You never want those things to happen. It was disappointing. 2 arrested in connection to AUS team bus attack at Guwahati

I think everyone was alright. I think what happened in Bangladesh with the rock as well, no one was too rattled, Zampa recalled a similar incident which took place in Bangladesh. It was dealt with quite well, I think. It was just a disappointing thing to happen. Sports Minister Rajyavardhan Rathore reassures safety of Australian cricketers 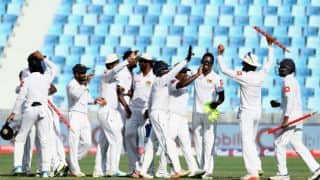