Watch: Misbah-ul-Haq welcomed to the crease with guard of honour during Pakistan vs West Indies 3rd Test, Day 2

Watch: Misbah-ul-Haq welcomed to the crease with guard of honour during Pakistan vs West Indies 3rd Test,

Pakistan skipper Misbah-ul-Haq was welcomed to the crease with guard of honour by the West Indies players on Day Two of the third Test, just like Younis Khan was on Day One. Incidentally, Misbah replaced Younis at the crease after he dismissed for 18 from 75 balls. Misbah shook the hands of all the West Indies players before taking guard. Misbah joined Azhar Ali at the crease after Younis’ dismissal. Skipper Jason Holder trapped Younis in front. He did take a review, but the on-field umpire’s decision stood. Earlier in this series, Misbah completed 5,000 runs in Test cricket. He was left stranded on 99 in the first Test, but was then dismissed for the same score in the second Test, making him first ever player in Tests to have three scores of 99s to his name. FULL CRICKET SCORECARD: Pakistan vs West Indies 2017, 3rd Test at  Windsor Park, Roseau, Dominica

Misbah took over as Pakistan skipper after the 2010 spot-fixing saga at Lord’s that rocked the world. One of the accused, Mohammad Aamer is currently part of the Pakistan team, playing under Misbah. Misbah has scored a century against all Test playing nations except Bangladesh and Zimbabwe. Misbah also held the record for the joint fastest century in Tests, which came off 56 balls against Australia in 2014-15. However, Brendon McCullum bettered that record on his final Test in 2015-16, bringing up his ton off just 54 deliveries. Live Updates: West Indies vs Pakistan 3rd test, Day 2 at Roseau, Dominica

Misbah’s highest Test score of 161 not out came against arch-rivals India at Eden Gardens, Kolkata in 2007. After the conclusion of the four-match series against England last year, Pakistan went to the top of the ICC Test rankings for the very first time, but their stay at the top was short lived. 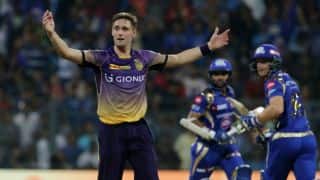 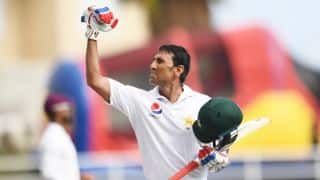