Taylor could face sanctions which may not relate to dissent, but there is a clause in the ICC rulebook that deals with players on-field behaviour.

The first ODI between Pakistan and New Zealand was riddled with controversy at the Sheikh Zayed Stadium in Abu Dhabi on Wednesday. Pakistan allrounder Mohammad Hafeez s bowling action was questioned, not by the officials, but Ross Taylor, who stitched a 130-run partnership with wicketkeeper-batsman Tom Latham for the third wicket as the duo guided the tourists to 266/9 at the end of the first innings after Kane Williamson opted to bat.

The incident occurred at the end of Hafeez s first over. Taylor made a public gesture to the on-field umpires Joel Wilson and Shozab Raza that the 38-year-old Hafeez, whose action was deemed illegal four times by the International Cricket Council (ICC), three of them in the last four years, is clearly chucking.

“Ross Taylor” called Mohammad hafeez chucker by showing actions to his partner, and Sarfaraz was right to have an argument with the umpires because its not your job its the job of #ICC. #PAKvNZ pic.twitter.com/VP0XpZZd8y

Taylor s action enraged Pakistan captain Sarfraz Ahmed, who was seen having a lengthy chat with the umpires, and had a verbal duel with Taylor while on his way back. Taylor could face sanctions which may not relate to dissent, but there is a clause in the ICC rulebook that deals with players on-field behaviour.

So @RossLTaylor complaining about Hafeez bowling action ?? It looks Taylor is not happy with @MHafeez22 action

Hafeez, who has made a comeback to the side, was first reported for illegal action, 14 years ago during an ODI tri-series in Australia in 2005. In 2014, his action was under the scanner during the Champions League T20 and then was again reported for suspect bowling action during against New Zealand later that year. Hafeez was suspended after results showed that the flex of his elbow was more than the stipulated 15 degrees.

It’s for umpires to umpire a match and players to stick to playing cricket. Here’s Ross Taylor telling the umpire that he thinks Mohammad Hafeez is chucking #PAKvNZ #Cricket pic.twitter.com/r7o053w5CJ

Hafeez got the green signal to bowl in April 2015, but was soon under the scanner again, his second report in two years. The ICC then banned Hafeez s offspin for 12 months, following which he returned in 2016, but the issue cropped up again in October 2017. After another test, Hafeez was cleared to bowl by the ICC in April 2018.

In the UAE this year, Hafeez has bowled 19 overs in one Test and six T20Is against Australia and New Zealand, without any report of suspect action. 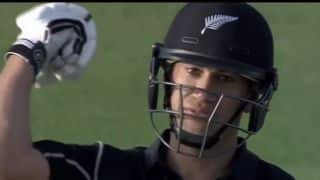