Both sides will play five ODIs, one T20 and three Tests beginning with the first ODI on October 10

England begin their tour of Sri Lanka with a warm-up match at the Premadasa in Colombo on Friday against Sri Lanka XI. Both sides will play five one-day internationals, one Twenty20 and three Tests beginning with the first ODI on October 10.

Pitted as favourites, England enter Sri Lanka on the back of a thumping 4-1 Test win against India. Sri Lanka, meanwhile, ranked No. 8 in ODIs, have to pick up the pieces following a failed 2018 Asia Cup campaign that led to the controversial sacking of Angelo Mathews as captain.

England were handed a 2-5 defeat when they visited Sri Lanka the last time in 2014. However, should Sri Lanka spring a surprise, the visitors will be ready “grit it out”.

“If you look at the pitches for South Africa, they looked like good cricket pitches,” Jonny Bairstow told ESPNCricinfo on Thursday.

“Whether they change their tactics and produce pitches that are slightly different for us… so be it. We’ve got to prepare like that’s the case. Yes, we’d like to play on good pitches and yes, we’d like to have high-scoring games, but we’re prepared to guts it out and grit it out if needed.

“Both teams have to bat and bowl on them, whether it’s batting first or bowling first, under lights or through the day. We’ve experienced these challenges before in India and Bangladesh and come out on top, so we’re confident going into the series. We like to think the majority of our players have experienced conditions around the world.” 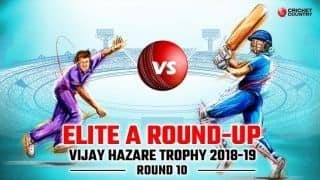