Welcome to the brotherhood, you little bastard, was the text message Langer sent him, according to Harris, as reported by foxsports.com.au.

Harris and Langer have a bit of history, as Harris had left West Australia in 2016 moving to Victoria, when Langer was the coach at WA. Then Langer had said thus about Harris: His performances have been mediocre with flashes of brilliance. Marcus played more than 40 matches for WA and scored just four centuries.That must be frustrating for him, as it is for the coaches and fans.

Two and a half years later, Harris averaged 47.58 with five centuries in 25 first-class matches for Victoria and earned his maiden Test call up.

I said to him I was actually speechless and he said ‘no you weren’t’. It was really good. I am really looking forward to seeing him. I haven’t seen him for a little while,” said Harris about the message as reported by the Sydney Morning Herald.

Harris, 26, looks set to make his Test debut as opener at Adelaide Oval on December 6 as partner to Usman Khawaja who has been included in the squad. 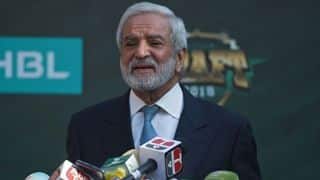