Almost from nowhere, left-arm West Indian pacer Delorn Johnson has emerged as one of the brightest fast bowling prospects in the region. 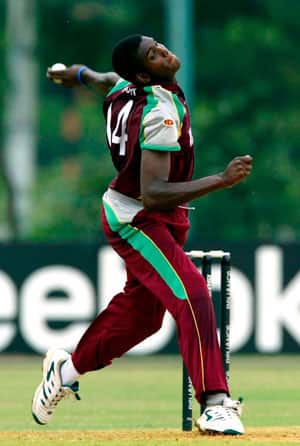 Almost from nowhere, left-arm West Indian pacer Delorn Johnson has emerged as one of the brightest fast bowling prospects in the region.

If his performances for the West Indies A in the current series against visiting India A are anything to go by, the 23-year-old Vincentian could be on his way to a long successful career for the Caribbean nation.

He has been the stand-out bowler in the series so far with his ability to get swing with the new and the old ball, as well as to bowl with sustained pace on slow surfaces.

A tall strong lad with the ability to bowl pacy spells, Johnson credited his stint at the Sagicor High Performance Centre between 2010 and 2011 as one of the main reasons for his vast improvement.

“I would say I got a lot of knowledge and learned a lot during my two years at the HPC. It has made all the difference in my development and in my cricket career,” Johnson said.

“When I went there I was a bit ‘raw’, but I was able to settle down and work hard on my bowling and all other aspects of my cricket. I knew I had to work hard if I wanted to progress and I got a lot of good advice from the coaches there as well.”

He continued: “All the things I got from the HPC I am now putting into my game and things are looking up for me. One of the things I really wanted to focus on was my control and consistency and I managed to get that sorted.

“I don’t want to get ahead of myself. I am bowling well and I just want to keep doing well for the West Indies A team and help us to win this series.”

Standing six-feet-five-inches tall, Johnson was almost unplayable in the West Indies’ win in the second ‘Test’ on his home turf at Arnos Vale last weekend.

He earned career-best figures of six for 34 from 17 menacing overs in the second innings, rocking the Indian top order with four wickets in the final hour of the penultimate day Monday before picking up two more in the first hour Tuesday morning.

Johnson ended with eight wickets in the game to follow up his five wickets in the opening fixture in Bridgetown where the Indians recorded a two-wicket win.

In his brief first-class career, Johnson has so far played just nine matches with 27 wickets at an impressive average of 19.00 runs each. He is also a capable hard-hitting lower-order batsman with an average of 29.00 and a top score of 51.(IANS)