Curtains have come down on West Indies' first innings at 295 all out in response to England's 399.

Curtains have come down on West Indies‘ first innings at 295 all out in response to England‘s first innings total of 399. The match, being played at Antigua is poised firmly in England’s favour at this point. Even a moderate performance with the bat could mean victory for England in this first Test of the three-match series. Live scorecard: England tour of West Indies 2015, 1st Test at Antigua

Jermaine Blackwood top scored for the hosts with a 112*. But his innings was pretty much a gift by the Englishmen as he was given two clear cut lives even before he reached his half century. In the first innings he was dismissed by Ben Stokes only to be reprieved due to a front foot no ball. On Day Two, he was dropped in his forties. Live Updates: England tour of West Indies 2015, 1st Test at Antigua Day Three

He certainly capitalised on the missed chances but overall the West Indies were still quite shoddy. A few batsmen got starts but as has become the trend now with the Windies batsmen, they threw it away. Marlon Samuels chipped in with 33, Shiv Chanderpaul accumulated 46, while Kraigg Brathwaite looked good in his knock of 39. ALSO READ: Jermaine Blackwoood scored maiden Test ton

The West Indian tail was very unsupportive of the now well-settled Brathwaite and Jason Holder, Kemar Roach, Jerome Taylor and Suliemann Benn all got out for paltry scores. The England bowling was quite good overall but Tredwell was special with hsi variations and got four wickets.

In the process, the Windies have conceded a lead of just over 100 runs. England will hope for the batsmen to put up a respectable total and may want to score with a little aggressive intent so as to put up a challenging target in as little time as possible and later give their bowlers a real chance to seal victory. 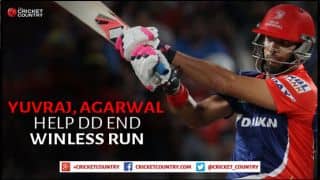