Marlon Samuels nears his century at the end of Day 1.

West Indies end Day one on 188 for five on Day one of the second Test against England on a day, which started later than usual due to rain. Bad light eventually stopped play with only 70 overs bowled today.  Marlon Samuels and skipper Denesh Ramdin are the two unbeaten batsmen for West Indies. Samuels six short of his seventh Test ton at the end of the day. Ramdin is giving him good company but he has made a slow start to this innings. But the positive thing for West Indies is that this 50-plus partnership has ensured that they end the day in a decent position. Full Updates West Indies vs England, 2nd Test, Day 1

England struck early with a couple of wickets as Kraigg Brathwaite and Devon Smith were dismissed early by Anderson and Jordan respectively. West Indies fought back but it was cut shot as Darren Bravo was dismissed for a fighting  35 with West Indies still in a spot of bother at 65 for 3.

It was an excellent move from England skipper Alastair Cook as Ben Stokes struck in his very first over to get rid of Bravo. Shivnarine Chanderpaul too was dismissed shortly after that for just one. Samuels and Jermaine Blackwood put on a good 55-run stand for the fifth wicket that got West Indies back into the game. But he departed after he got off to a good start. Full SCORECARD: West Indies vs England

Samuels and Ramdin then got together and have put on an excellent partnership and have ensured that there is no more damage done. England will be happy with the day, but West Indies head back to the pavilion with some momentum. Ramdin has just scored just six in the unbeaten 59-run stand. Samuels exploded after getting to his half-century and this counter-attacking cricket has given England something to think about. Marlon Samuels scores half-century in West Indies vs England 2nd Test at Grenada

Chris Jordan was England’s most successful bowler with two wickets to his name. James Anderson, Stuart Broad and Ben Stokes have picked up a wicket apiece and will look to add to their tally as they day progresses on Day 2. West Indies will look to reach a big score with Samuels and Ramdin batting well.

England had earlier won the toss and elected to bowl first. Play started a little late as there was some rain ahead of the day’s play. As a result, only 15 overs could be bowled in the first session. Both the teams have made changes to their sides. England have replaced off-spinner James Tredwell with Moeen Ali. West Indies have roped in Sheldon Gabriel in place of Jerome Taylor and Devendra Bishoo in place of Suliemann Benn. 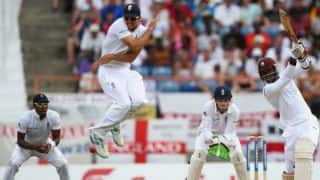