Stone may not get to feature in the Test series.

Olly Stone, one of the quickest bowlers in the England squad, currently gearing up to face West Indies in the Caribbean for the three-Test series which begins with the first match on January 23 at Barbados, suffered a major blow after he was sent for a scan following complains of lower back stiffness since he arrived last week.

Stone, who made his ODI debut against Sri Lanka in Dambulla in October last year, did not feature in the first warm-up match hoping that his back niggle would subside. However, the pain persisted and the England medical staff opted to send Stone for a scan. (ALSO READ: Stuart Broad to reveal new action after watching Sir Richard Hadlee s videos on YouTube)

According to a report in Cricbuzz on Wednesday, Stone may not get to feature in the Test series with Sam Curran all set to partner James Anderson and Stuart Broad. The injury might also put his Windies tour in jeopardy. 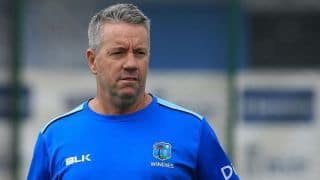