West Indies made a slow start to their innings in the 2nd Test against Bangladesh at the Sabina Park in Kingston. Bangladesh off-spinner Mehedi Hasan removed Devon Smith in the 9th over of the day with the WI score on 9. Kraigg Brathwaite and Kieran Powell have since made slow progress as the Bangladesh bowlers have kept it economical with WI being 47/1 in 20 overs when last reports came in.

Bangladesh captain Shakib al Hasan went for spin right from the second over after having won the toss and putting West Indies in to bat at the start of the second and final Test in Jamaica. Thrashed by an innings and 219 runs inside three days in the first Test in Antigua a week earlier, the Bangladeshis have brought in left-arm spinner Taijul Islam in place of seamer Rubel Hossain for their only change at Sabina Park. Former captain Mushfiqur Rahim is playing his 62nd Test, making him the most capped player for Bangladesh in Tests.

West Indies have been forced to make one change as senior pacer Kemar Roach is rested following a hamstring injury sustained in the victory at the Sir Vivian Richards Stadium, where his figures of five for eight on the opening morning set the tone for the encounter and earned him the “Man of the Match” award. His place in the team has been taken by all-rounder Keemo Paul, who makes his Test debut. Batsman Shimron Hetmyer also plays his first Test of the Caribbean international season with specialist spinner Devendra Bishoo omitted. 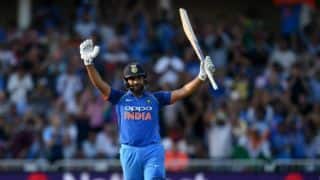