This is the third time that Shillingford has been called for having a suspect action.

Shane Shillingford, the one-time West Indies offspinner, has been suspended from bowling in domestic cricket with immediate effect.

The latest incident in the 35-year-old’s stop-start career came during the opening game of the domestic four-day competition in St Lucia in January. Shillingford, who played the last of his 16 Tests in 2014, claimed five wickets in his team Windward Islands’ defeat to Guyana and then turned in their second game, taking 12 wickets against Trinidad and Tobago, before authorities ruled his action to be illegal.

A Cricket West Indies (CWI) statement said that Shillingford cannot bowl until his action is cleared. He will have to undergo remedial work to correct his action.

Shillingford has a history of problems related to his bowling action. He was reported in November 2010 and resumed bowling in June 2011, and then in 2013 was suspended again when on tour with West Indies in New Zealand. 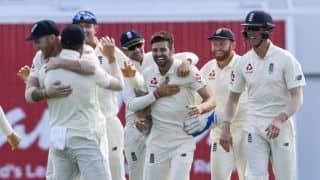