West Indies could only score 132 runs for the loss of eight wickets against New Zealand in what turned out to be a rain marred Twenty20 International (T20I) at Roseaw. It was New Zealand skipper Brendon McCullum who won the toss and elected to bowl.

For the West Indies,  Andre Fletcher known for his power-hitting scored a half century. Darren Bravo looked in fine touch before succumbing to Corey Anderson’s medium pace bowling.The opening pair of Tim Southee and Trent Boult took two wickets each.  New Zealand will fancy their chances of chasing down the modest target for sure.

West Indies would be disappointed with the score, as with their line-up they would have expected to do better. It has to be remembered that the outfield was slow due to persistent rain and two overs were taken off their allotted 20 overs. Windies also are missing the servies of Chris Gayle, who has been rested for the T20I series.

Even when Andre Fletcher and Darren Bravo essayed sixes, the Windies didn’t seem like posting a good total on the board.  From here it would be a good achievement for West Indies to win the game as one expects New Zealand to chase down a target of just 133 runs. The outfield though is slow and West Indies’ think-tank may still believe that they can win the game. 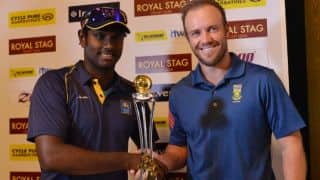 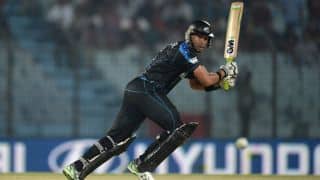