Will hosts West Indies rally in the format they are best at? Can Bangladesh channel the good vibes from the recent ODIs into Twenty20 internationals, a boost they so desperately need following a dismal run over the past year? These are the two big questions facing the teams as the three-match T20I series gets underway in St Kitts on Wednesday.

Bangladesh will be confident after beating West Indies 2-1 in the ODI leg of their tour, a result which ended a nine-year losing streak in the Caribbean, but have issues to address given their most recent outing in this format was a 0-3 loss to Afghanistan in Dehradun.

West Indies, the most dangerous in T20Is and defending ICC World Twenty20 champions, will seek to give their fans reason to cheer after the ODI defeat.

The second and third matches will be played on August 4 and 5 at Florida s Central Broward Regional Park.

Weather: Partly cloudy with a high of 29 degrees Celsius.

West Indies have rested Chris Gayle and dropped Rayad Emrit, with Chadwick Walton and Sheldon Cottrell recalled in the 13-member squad. Walton is the second wicketkeeper after Denesh Ramdin, and should be an automatic replacement for Gayle.

The touring team have been boosted by the return of Mustafizur Rahman, who missed the T20Is against Afghanistan on account of a toe injury. There are not likely to be wholesale changes to the XI that last played in June.

– Head to head in T20Is, West Indies have a 3-2 advantage over Bangladesh.

– The in-form Tamim Iqbal is Bangladesh s leading run-scorer versus West Indies in T20Is, but of his 132 runs, 88 came in one innings. 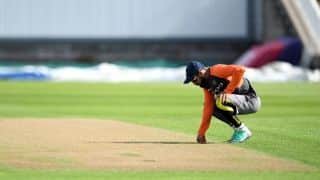