Bangladesh were 184 for 4 at Tea on day four at St Vincent.

Bangladesh fought back in their second innings in the first Test against West Indies at St Vincent, with a unbeaten 77 run partnership between Mushfiqur Rahim (33*) and Mamudullah (41*) for the fifth wicket. Bangladesh had gone through the session without losing a wicket, but they are still 118 runs away from making West Indies bat again. This pair had looked for runs, taken quick singles, and not let the bowlers tie them down too much.

Earlier in the start of day four West Indies enforced the follow on. Bangladesh’s poor show with bat continued in the first session of Day 4 as they lost four wickets for just 107 runs. Visitors finished the first session on 110 for four. Tamim Iqbal and Imrul Kayes did display some fight after the early dismissal of Shamsur Rahman, but an over from Chris Gayle saw Imrul Kayes lose his concentration and give away a wicket by playing a lose shot.

Wickets fell in a tumble after Kayes dismissal, and Sulieman Benn who took five wickets in the first innings piled on further misery by dismissing Mominul Haque and Tamim Iqbal (53). West Indies still in control of the game. With four more sessions to go in this Test match, Bangladesh need more contributions form their lower middle order. 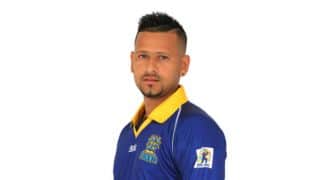 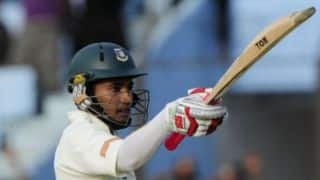