James Anderson wrecked the West Indies but England were tottering at 39 for five in their second innings, a lead of 107 runs, on the second day of the third and final Test on Saturday. On a pitch that is rapidly deteriorating, 18 wickets fell in the three sessions, the most in a single day’s play in the 85 years of Test cricket at the venue. Live Updates: West Indies vs England Day 3

After being the last wicket to fall in the tourists’ seemingly modest first innings total of 257 in the morning, the irrepressible Anderson claimed six for 42 -– his 17th five-wicket innings haul — to mastermind the demolition of the home side for 189. Only Jermaine Blackwood offered any substantial resistance with a counter-attacking innings of 85 before he was last out off Anderson, who is now just four away from becoming the first Englishman to take 400 Test wickets.  In 21 overs to the close, England lost half their side and will resume on the third morning with the pair of Gary Ballance and Ben Stokes at the crease. Live Scorecard: West Indies vs England Day 3

Slowly but surely the concept of live streaming is capturing the imagination of the internet. Such fans that do not have access to televisions search the internet frenetically for websites on which they can watch their favourite teams in acti0n. Live Streaming is catching up a huge trend in the internet users in India and other parts of the world. Geoffrey Boycott feels Jonathan Trott lacks technique of Test opener 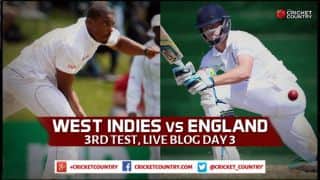