West Indies are in command going into Day Two of the third Test.

England ended Day One of the third Test at 240 for seven on a day when Alastair Cook finally stepped up to the plate and scored a magnificent century to guide his team to a respectable position. Shannon Gabriel and Jason Holder picked up two wickets each. Moeen Ali scored an excellent half-century batting down the order. He stitched a 98-run stand with Cook for the fifth wicket. Geoffrey Boycott feels Jonathan Trott lacks technique of Test opener

West Indies now have to pick the remaining three wickets to wind up the England innings. They will hope that they do it soon and get their batting innings underway. They will have to establish a huge lead to put any sort of pressure on the England players. ENG finish on 240/7 at stumps on Day 1 in 3rd Test vs WI at Barbados

England had earlier won the toss and elected to bat first. England went into the Test with the same team. But West Indies made a couple of changes. Devon Smith has been replaced by debutant Shai Hope. Devendra Bishoo suffered an injury in the previous match and his place has been taken by Veerasammy Permaul. Graeme Swann believes giving Joe Root Test captaincy now would be a disaster 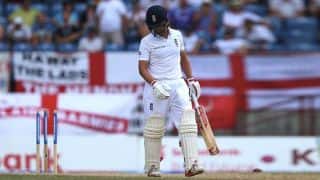