Chase returned with career-best figures of 8/60 as West Indies crushed England by 381 runs to win the first Test at Barbados on Saturday.

Roston Chase was the wrecker-in-chief returning with career-best figures of 8/60 as West Indies crushed England by 381 runs to win the first Test at Barbados on Saturday. (West Indies vs England, 1st Test: FULL SCORECARD)

Set an improbable 628 a target that came on the back of a sublime double century by captain Jason Holder England slid to an ignominious defeat losing their last six wickets for 31 runs as the tourists were dismissed for 246 on the fourth day. (ALSO READ: Jason Holder is new no. 1 Test allrounder in ICC rankings)

The margin of victory was the largest by the West Indies on home soil and third largest anywhere in their 91 years as a Test-playing nation.

Former England cricketer-turned-commentator David Lloyd slammed Joe Root and Co. and said that they treated offspinner Chase with too much respect.

“Off spinner? He’s just a slow bowler. He hasn’t spun a ball and he’s got an eight-for. They were playing him like it’s Lance Gibbs and Muttiah Muralitharan rolled into one! Take the game to him, he’s inexperienced, he’s a part-time spinner, Lloyd told Sky Sports on Saturday. (ALSO READ: We still have a long way to go: Jason Holder)

“Give him something to think about. That means coming down the pitch. Slip is in play and he keeps beating them on the outside. That was woeful. England have played some superb cricket in Sri Lanka and beaten India 4-1, but we’ve always got one of these in us. I’ve been around a long time and that’s as bad as I’ve seen.”

“First innings I thought they were undone by some exceptional bowling,” said Atherton. “But in the second innings there were some terrible shots Joe Root, Rory Burns, Moeen Ali.

“I don’t think England necessarily underestimated the Windies, although some people did. If you haven’t got the preparation time and practice time that everyone’s talking about, you’ve got to switch on mentally.

“When you see shots like Moeen Ali played in that first innings, you cannot tell me he’s walking to the crease in that frame of mind I m in a Test match and I need to be bang on’.” 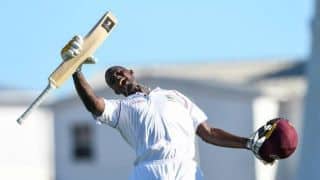