Despite showing the traditional left-hander's vulnerability outside the off-stump, Burns played attractively in getting to 84.

Barbados: Rory Burns missed out a maiden Test hundred as two bowling changes paid off for the West Indies with England reaching the lunch interval at 134 for two having been set the improbable target of 628 on the fourth day of the first Test at Kensington Oval in Barbados on Saturday. (West Indies vs England, 1st Test: FULL SCORECARD)

Thoroughly outplayed by the home side over the previous two days to the extent that they find themselves in what looks a hopeless cause, the tourists showed greater appetite for the contest in the morning session in adding 82 runs to their overnight position of 52 without loss.

However, it was the loss of both openers and especially the manner in which they departed which will trouble England as they try to salvage something from the match before the teams turn their attention to the second Test beginning in Antigua next Thursday. (ALSO READ: Jason Holder achieves long-cherished Test double to bury England)

Despite showing the traditional left-hander’s vulnerability outside the off-stump, Burns played attractively in getting to 84, the highest score of a young Test career which is just into its fourth match.

His first attempt at an attacking shot in the second over of the day was edged to the third man boundary through the gap between third slip and gully at a catchable height off Kemar Roach. Still he kept on playing positively, following in the vein from the previous evening, and brought up his second Test half-century off 79 deliveries with ten fours.

But he lost opening partner Keaton Jennings for 14 after a stand of 85, England’s best effort for the first wicket in Tests in more than two years. As in the first innings, Jennings’ left-hander’s flaw to deliveries angled across him proved his downfall as he drove at Alzarri Joseph in the lanky fast bowler’s first over of the morning for Jason Holder to pull down a sharp catch high to his left at third slip.

Jonny Bairstow joined Burns and the two instinctively attacking players mixed discipline with aggression in a partnership of 49 which took them to the verge of the lunch interval when another bowling change by Holder brought a second wicket.

Roston Chase, whose off-spin was not required in the England first innings debacle when they were routed for just 77 off 30.2 overs on the second afternoon, struck with his fifth delivery as Burns left a gap between bat and pad pushing forward to a straight ball which hit the top of off-stump.

It proved to be the last ball of the session which lifted West Indian spirits even further at the same time that it deflated England s. They will now be looking to their captain, Joe Root, who is expected to come to the crease with Bairstow (29 not out) after the interval, to match the heroics of West Indies captain Holder who dominated day three with an unbeaten 202 in an unbroken seventh-wicket partnership of 295 with Shane Dowrich.

Dowrich, whose 343-minute occupation of the crease in compiling 116 not out left him with a sore back overnight, has remained in the dressing room so far on day four with Shai Hope deputising as wicketkeeper. 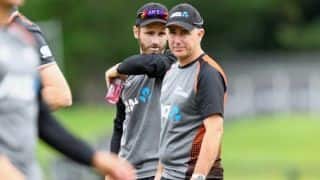