Set the improbable target of 485 after Joe Root declared his side s second innings, West Indies crashed to 35 for four at lunch.

James Anderson was at his destructive best in blowing away the West Indies top-order batting to put England on course for a massive victory at lunch on the fourth day of the third and final Test at the Darren Sammy Stadium in St Lucia on Tuesday. (LIVE, West Indies vs England, 3rd Test: FULL SCORECARD)

Set the improbable target of 485 after Joe Root declared his side s second innings at 361 for five following his dismissal for 122, the home team crashed to 35 for four with the rampant Anderson taking the first three wickets.

Mark Wood, whose raw pace earned him his first five-wicket innings haul in Tests on day two, added to that tally with the wicket of Shai Hope just before the interval to leave Roston Chase and Shimron Hetmyer with the task of bringing some respectability to a West Indian innings which seemed to be in freefall amid the carnage wreaked by Anderson. (READ: Root ton gives England massive lead over West Indies)

He triggered the West Indies slide with just the third delivery of the innings when John Campbell, facing his first ball, sliced a booming drive to Moeen Ali at gully. Campbell s opening partner, Kraigg Brathwaite, seems doomed to suffer yet another defeat as stand-in captain and offered little resistance himself to Anderson when he prodded indecisively at a full-length delivery and Ben Stokes held the catch at second slip.

Worse was the follow for the West Indies when Darren Bravo, troubled by a finger injury which kept him off the field for the entire England second innings, followed a delivery from Anderson for Root to complete a comfortable catch at first slip. (ALSO READ: Shannon Gabriel issued warning for using abusive language)

Mindful of a forecast of showers later in the day, Root gave both Stokes and Wood spells with the relatively new ball in the quest for more success before the lunch interval.

Wood provided it when Hope, on 14, was caught on the back foot to a delivery which did not make the height that he anticipated and Stuart Broad pedalling back at cover-point held the catch with both hands over his head.

England clearly had a swift declaration on their minds at the start of the day s play with Root and Stokes resuming at 325 for four. They belted 36 runs at a run-a-minute until the skipper miscued a low full-toss from Shannon Gabriel and Hetmyer held the catch diving forward at midwicket to prompt the declaration.

West Indies have already won the series after massive victories in the first two Test matches in Barbados and Antigua and are playing this match without regular captain Jason Holder, who is serving a one-match suspension for the failure of his team to maintain the required over-rate in the previous match at the Sir Vivian Richards Stadium. 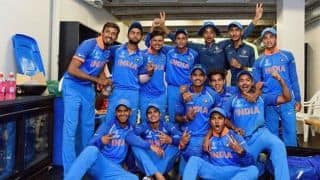 Suraj Ahuja to lead India U-19 in South Africa Tests, Nehal Wadhera, Rahul Chandrol named captains of India A and India B 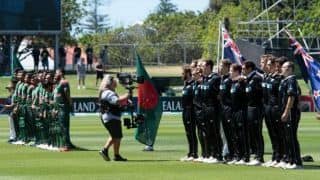