Joseph lost his mother before day three but took the field in a stirring display.

West Indies captain Jason Holder has dedicated his team’s ten-wicket victory over England in Antigua to the rookie fast bowler Alzarri Joseph, who lost his mother on Saturday morning.

Despite the death of his mother Sharon, the 22-year-old Joseph came out to bat on day three and later too 2/12 as West Indies crushed England to claim the series with a match to spare. (READ MORE: Holder, Roach lead West Indies to crushing win over England)

“It took a lot of heart for him to be on the field today,” he said. “I know he wanted to do something special for his mum, and credit to him for that.”

Holder gave Joseph the option of not playing after his mother’s death, but the pacer decided to play for West Indies. When he came out to bat, Joseph received a standing ovation from the crowd at Sir Vivian Richards Stadium. Later in the day, he removed Joe Denly and Joe Root in a telling spell of pace.

“When we came together in the huddle we just wanted to do it for him,” said Holder. “He wanted to play and I couldn’t deprive him of the opportunity. We dedicate this day to him and his mum and also to his family. He’s a champion.” 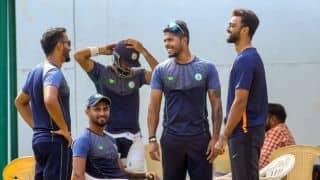