The Caribbean tour should provide a good barometer of England s progress.

In a massive year highlighted by the 2019 ICC Cricket World Cup – a tournament the England men s team has never won – followed by the Ashes at home, Jos Buttler has spoken of the need for the host nation to stay fit and focused.

Earlier this month, the England & Wales Cricket Board (ECB) chief executive Tom Harrison termed 2019 as a once in a generation opportunity while stressing on the challenge for England s leading cricketers in ODIs and Tests to maintain their focus on the challenge in front of them. Buttler, who arrived in the West Indies from a short stint in Australia’s Big Bash League, spoke Monday about the importance of player management. (ALSO READ: Coming off ‘best’ year ever, Jos Buttler confident in where his game is)

It is a massive year and we have to be fresh and excited going into the big events, he told reporters ahead of England’s first warm-up match at the 3Ws Oval in Barbados. There is lots of cricket coming and one of the things both captains (Joe Root and Eoin Morgan) and management have done is look after the players which is really important.

We ve talked about about this year being massive for the game. We don t want people to be too tired but there s a fine balance between doing too much and too little. We only have a short career and you want to play as much as you can. There are amazing possibilities around the world but you have to balance your time well and it s important for myself especially to have time away from the game. So it s a discussion for everyone, being open and honest and trying to find the best solutions. (ALSO READ: England s biggest year in a generation starts with West Indies Test)

A three-Test tour and five-match one-day series in the Caribbean should provide a good barometer of England s progress; they are ranked No 1 in ODIs and second in Tests.

We re all in a very fortunate position to potentially play a part in a huge period of time for England cricket. They re all very romantic ideas but the end product comes from hard work in the years before that and from doing some good stuff now,” said Buttler. I m very aware of how quickly things can change in cricket and if you look too far ahead you can come unstuck.

West Indies host England for three Tests, five ODIs and three T20Is. The series gets underway at Bridgetown on January 23, with the touring team playing a couple of two-day warm-up matches against a West Indies Board XI. 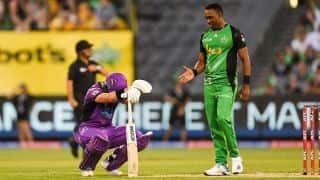