England kept faith on Monday with the squad that delivered a Test whitewash in Sri Lanka, naming the same 16 players who finished that tour for the series against the West Indies.

That means no place for Surrey’s Ollie Pope, who was initially selected for Sri Lanka but left early to get game time with the second-tier Lions side, and a reprieve for Kent’s Joe Denly.

ALSO READ: Foakes will ‘definitely’ keep wicket for England in the next series: Bayliss

The uncapped 32-year-old was not required during the 3-0 win but will once again travel as batting cover for the three Tests, ahead of Pope and his overlooked county colleague Jason Roy.

Wicketkeeper Ben Foakes was a late addition in Sri Lanka after an injury to Jonny Bairstow and takes his place as a first-choice pick after collecting Man-of-the-Series honours.

The 15-man one-day squad also has a familiar look as the countdown to next summer’s ICC Cricket World Cup continues. Left-armer David Willey returns and Mark Wood  is included ahead of Olly Stone, who made his bow in Sri Lanka.

England are due to play three Tests, five one-day internationals and three Twenty20 internationals on their tour of the West Indies, which starts next month.

The T20I squad will be announced at a later date. Kohli plays down public’s “unpleasant” treatment towards Smith and Warner 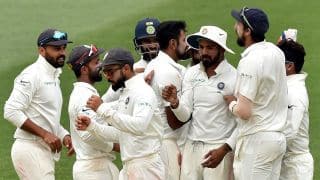 Adelaide Test victory one to savour, but much to ponder for Virat Kohli’s India