England coach Trevor Bayliss was left speechless when asked to explain his team's crushing defeat against West Indies in Barbados.

England coach Trevor Bayliss was left speechless when asked to explain his team’s crushing defeat against West Indies in Barbados. The tourists were the favourites ahead of the first Test but West Indies defied all predictions in a dominating show that saw them win by 381 runs. (ALSO READ: WI coach braced for England fightback)

England managed 77 and 246 in reply to West Indies’ 289 and 415/6d across the two innings. Bayliss his men need to show more guts and determination in testing situations.

“I m speechless,” Bayliss said. “I think it gets down to a bit of guts and determination to get through those tough periods. They bowled extremely well against us but we have got to be able to deal with it.”

England are worried about the form of opener Keaton Jennings managed 31 runs in the Test. On the other hand, his opening partner Rory scored 2 and 84.

The 26-year-old extended his run in the longest format thanks to 146 against Sri Lanka last year but since then has been struggling and he could get the axe for the second Test that starts from Thursday in Antigua.

On Burns, the Australian said, “Burns has shown enough. As we said in Sri Lanka, he looks like he s been here for 20 or 30 Tests, not four. He s still learning and will still get better.”

England were also criticised for their selection that saw them benching Stuart Broad and took field with Sam Curran alongside two spinners (Moeen Ali and Adil Rashid) who were found struggling. “You make those decisions thinking the five guys you pick are going to bowl as well as we know they can do. Take Stokes and Anderson out, maybe one spell of Moeen, and we were far from our best in this match. We have a bit of work to do there,” he said.

It was down to Curran or Broad. The gut feel was Curran; he has done well for us over the last seven games. It didn t work out like that, the young bloke has had his first bad Test in his career. It won t be his last but he s a good young player who will learn from it.

Bayliss is though positive and hopeful that England will bounce back from the result like they have been doing recently. “The boys are in the dressing room hurting and I d be worried if they weren t. But we ve been in this situation before and come out and played some good cricket. So I m looking forward to the next Test, he said. 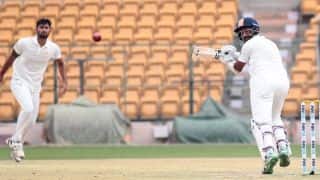