Hello and warm welcome to the live updates of the second Twenty20 International (T20I) to be played between the West Indies and New Zealand at Roseau. This is Bharath Ramaraj and I will be taking you to through the updates for the entire match.

After winning the first Twenty20 International (T20I) at Roseau via Duckworth Lewis Method, New Zealand will look to wrap the series in the second game to be held at the same ground. For West Indies it is all about levelling the series by winning the second game. New Zealand’s key players like Brendon McCullum and Ross Taylor looked in fine touch in the first game and that would have buoyed the spirits of New Zealand think-tank.

West Indies, in the first game struggled to get going with the bat. Even when Andre Fletcher looked in fine touch, West Indies struggled to keep the scoreboard ticking. They need to put up a better show in the second, if they have to challenge the Kiwis. They need their all-rounder like Andre Russell and Darren Sammy to come good. 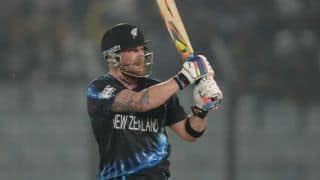