Harris reveals he wasn't keen to bowl as Australia were desperate for wicket against South Africa.

Ryan Harris said on Monday revealed he was praying ‘Please, not me’ when Australia captain Michael Clarke was desperately looking for a bowling change to break the stubborn stand between South Africa’s Dale Steyn and Vernon Philander on the fifth day of the final Test.

“Then I started to get a few butterflies, I was getting nervous because I knew how close we were. Michael called me over and said ‘You do what’s best for what you think is going to get this wicket’. So I said ‘I think I’m going around the wicket and going to swing one in’. And he said ‘Do it’. Michael [Clarke] puts the onus on you to execute what you want to do to execute your plan.”

Harris said the Australian pacers were left amused why they did not get any reverse swing despite doing everything right in the second Test against South Africa at Newlands, Cape Town.

Dale Steyn claimed five wickets in the match to help South Africa bounce back with a huge 231-run win. Steyn generated immense reverse swing to blow away the Australian batting line up, as they slipped from two for 152 to 216 all-out on the fourth day.

Harris told Cricket Australia’s website, “In the second Test the ball we had looked perfect for reverse but it just didn’t swing. We don’t know why that is.”

“That second Test was a big letdown for us, just the way we I guess folded against the reverse swing. [Dale] Steyn bowled very well but we should have done a little bit better with that. But the test of the character was the way we were going to bounce back and the way we did it in Cape Town was perfect,” Harris added.

The Australian pacer said his side was left disappointed after the South African players failed to join them for a beer at the end of the third Test. On the final day, Steyn and Michael Clarke were involved in a heated discussion in the middle as the Australians pushed for a win.

However, Harris added that the relations between the two sides weren’t affected by South Africa’s failure to make it to the traditional post-series meeting in the dressing rooms.

He said Australia were very impressive that day. “We played hard on that last day, we tried to do all we could, within the rules of course, to try and make them make mistakes. We did that,” said Harris.

“We went pretty hard but nothing outside the spirit of the game. We copped a lot, especially in that second Test. I know I copped a couple of mouthfuls from Graeme Smith towards the end of that. That’s just the way it is.” 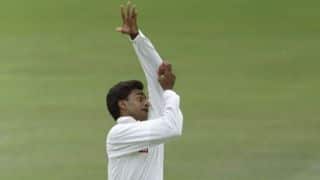