Thane: Hundreds of Class 9 Physical Training (PT) students of a local school were stumped when asked to answer an exam question on: ‘Who is Virat Kohli’s girlfriend?’. The question also came with three helpful options, the names of film actresses: Priyanka (Chopra), Anushka (Sharma) or Deepika (Padukone). A leaked copy of the question paper of Chacha Nehru Hindi High School, Bhiwandi town, went viral on social media, with many questioning the relevance of a cricket-Bollywood star’s personal lives in a school exam. The annual exam was conducted on October 13 by the school and the question figured in the objective section, as Q.No. 1(B). FULL CRICKET SCORECARD: India vs New Zealand, 2nd ODI at Feroz Shah Kotla in Delhi

Despite repeated attempts, the school authorities were not available for their comments in the matter. However, while speaking to local TV channels, the school principal A. R. Pandey has passed the responsibility for the goof-up on the PT teacher, who allegedly set the exam paper. The principal admitted that the blunder went ‘unnoticed’ but has not specified any remedial measures for the same. Parents are now worried whether those students who attempted it and got the answer wrong would be compensated or not, since the question was out of the study syllabus.

While there are questions being raised on Kohli’s girlfriend in schools, the Indian Test skipper is busy with his schedule through the year with long cricketing season ahead. Regarding his on and off relationship with Anushka, both have been mum about their relationship socially andn it still remains a mystery if they are going strong or there is trouble in the paradise. ALSO READ: Finally! Anushka Sharma opens up on her relationship with Virat Kohli

Kohli and co. will play their second One-Day International (ODI) against New Zealand at Feroz Shah Kotla in Delhi on Thursday. India have already taken the lead by 1-0 and are marching ahead with confidence in the series already. 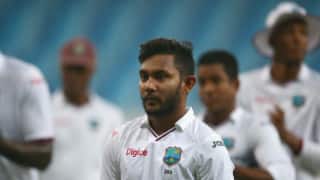