Here are the two theories that could maybe the reason behind the 19:29 mystery.

Ever since MS Dhoni announced his international retirement at 19:29 on Saturday evening (August 15), speculations have been rife about the timing of it. Why did he select 19:29 as the time? Fans have been trying to figure out what is it with the time. Some feel one should not read too much into it, while some others feel there has to be something behind it.

“Thanks a lot for ur love and support throughout. From 1929 hrs consider me as Retired,” Dhoni wrote along with the video on Instagram. The video showed his entire international journey from being run out in his first international innings to winning the 2011 World Cup, it was an emotional video as the iconic song ‘Main pal do pal ka shayar hun’ playing throughout the video.

Dhoni donned jersey number 7 during his career, while Raina wore number 3. If one joins the two digits, you get 73, which also happens to be the number of years India has completed its Independence.

The other theory suggests that it is the time when India lost against New Zealand in the 2019 Cricket World Cup in the semi-final, which was also Dhoni’s last international match for India.

Dhoni is currently in Chennai for a six-day training camp for CSK and is scheduled to leave for UAE on August 21. IPL 13 is scheduled to start from September 19 and the final would take place on November 10. Three venues would be used for the tournament in a bid to minimise travel for players amid the pandemic. 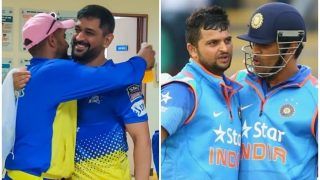