Both CSA and CA have declined their support to the proposal and pointed out that it was recently tabled for the first time by the WICB, but not agreed upon, at the Cape Town round of ICC meetings held in October.

The West Indies Cricket Board (WICB) had come up with the idea of imposing a levy of 20% of a player’s contract fee, which should be paid by the host board in order to let the West Indies players to participate in their T20 tournaments. The same idea has now faced staunch opposition from the other member boards, Cricket Australia (CA) and Cricket South Africa (CSA) to begin with. The two boards have strongly objected to the WICB’s decision to charge a release fee in order to provide a No-Objection Certificate (NOC) to Caribbean players participating in their domestic T20 tournaments.

The entire matter had first come to light earlier this week when it was revealed that WICB had denied Kieron Pollard an NOC to travel to South Africa for their domestic T20 tournament Ram Slam T20 challenge, where he plays for the Cape Cobras. In the subsequent media statement, the WICB had issued an explanation of its decision, which it said was a policy move made by its directorial board. But later in the same day, WICB chief executive Michael Muirhead said Pollard had been granted the NOC without any condition and also regretted the delay, adding that the WICB would carry on the dialogue with the other boards.

However, the other boards it seems have disagreed. Both CSA and CA have declined their support to the proposal and pointed out that it was recently tabled for the first time by the WICB, but not agreed upon, at the Cape Town round of ICC meetings held in October.

“It was a WICB proposal, but not supported by any other member at the time,” CSA chief executive Haroon Lorgat said. “It was the first time the topic was raised and it was concluded by all that we should reflect on it as a part of all of the other reforms or regulations that we are presently working on to support the primacy of international cricket.”

He further added that, “I was quite surprised by the approach of the WICB because we had discussed this concept in a very preliminary way at the last chief executives committee (CEC) meeting in Cape Town. As an isolated measure, we cannot support it at this stage.”

Muirhead had told ESPNcricinfo that WICB president Dave Cameron had said the concept was first discussed by the ICC board of directors at a meeting earlier this year. “I understand from my President that it was approved at the ICC board level, which is above the CEC. The Board agreed to the concept that [the] fee would be charged. I have not seen the minutes itself, but this is what he told me.”

According to Lorgat, the WICB decision was surprising because the ICC members had agreed that the concept of a release fee needed more discussion to understand the full implications. He even suggested said a release fee was appropriate in the case of the IPL, which is played for nearly two months every year, affecting the international cricket. In addition, the BCCI does not release their players to the other leagues. For these reasons the BCCI pays member boards a certain fee by way of compensation. 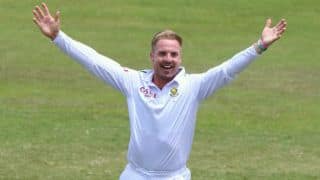