Days after claiming his first ODI hat-trick, against Zimbabwe in Bloemfontein, Imran Tahir came close to repeating the feat on Tuesday.

Days after claiming his first ODI hat-trick, against Zimbabwe in Bloemfontein, Imran Tahir came close to repeating the feat on Tuesday against the same opposition. This time the format was T20I and Tahir was on song having already struck in his first over after South Africa set Zimbabwe 161 to win the first T20I at Buffalo Park.

He pinned Zimbabwe captain Hamilton Masakadza in front on 7 and off the next, thanks to an excellent catch from ‘keeper Quinton de Kock, removed Tarisai Musakanda for a first-ball duck.

But, as an anti-climax, new batsman Sean Williams dismissed the hat-trick ball through covers for a four denying Tahir a chance to become the first spinner to achieve the feat in T20Is. However, Tahir would claim two more scalps to finish with 5/23 his best figures in the format which played a major role in bowling out Zimbabwe for 126 in 17.2 overs as South Africa took 1-0 lead in the three-match series.

While happy with his bowling, Tahir wishes he could have taken the hat-trick I wish I could have got the hat-trick, Tahir said at the post-match presentation. Till I am doing well for the team, I am happy. I am really pleased (with my performance). I don’t take things for granted. It came out the way I wanted it to.

Traditionally, pacers have been the ones making the use of new ball. However, it’s now become a common in international cricket to see as spinners handling the new-ball duties. Keeping that in mind, Tahir has been working on that aspect in the nets.

I practice with the old and new balls to be more accurate. I have been bowling in T20Is with the new ball. I am learning to do it in ODIs. I am a firm believer in the fact that it is never too late to learn, the 39-year-old said.

South Africa captain was impressed with Tahir’s spell saying the spinner has a knack of picking up wickets and they expect him to replicate that form in the ODIs as well.

Imran bowled really well. He has got the knack of picking up wickets and he showed that today by picking up three wickets up front. We want him to do the same in ODIs as well, Du Plessis said.

On a slow pitch, South Africa found themselves in trouble early after losing both their openers inside the first two overs. Du Plessis (34) combined with debutant Rassie van der Dussen (56) to stabilise the innings.

Du Plessis was impressed by the composure shown by the 29-year-old Van der Dussen. Wicket played a bit slow. I thought somewhere around 155 was about par. There was some dew and it tested us. Rassie played really well. To have that composure was great for someone playing his first game, he said. 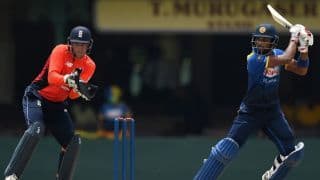 Sri Lanka vs England, 1st ODI, LIVE streaming: Teams, time in IST and where to watch on TV and online in India 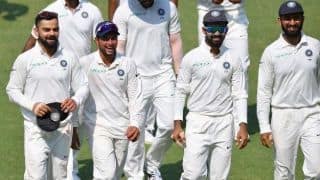