As per sources, the players have been offered a 4-day break and they'll reunite on April 25 before the game against CSK.

Mumbai Indians have released all the players for four days to ensure that they relax, spend time with their families and return strong for the business end of the tournament. With the 2019 World Cup starting barely a week after the IPL ends, India skipper Virat Kohli had time and again spoken about the need for players to be smart and manage their workload well to stay fresh for the showpiece event.

The only team in the competition apart from the Chennai Super Kings to have three Indian players who will be headed to the World Cup – Rohit Sharma, Hardik Pandya and Jasprit Bumrah – MI made the move keeping in mind the interest of the players and the need to keep them fresh not just for the second half of the IPL, but also the World Cup.

Speaking to IANS, sources in the know of developments said that the management decided to release the players after their game against Rajasthan Royals on April 20 and the players will reunite in Chennai on April 25 before the game against CSK.

“Players are the priority and the only instruction to the boys was that whatever you do, don’t get anywhere near a bat or ball. They should unwind, relax, switch off and focus on enjoying the four-day break,” the source said.

Asked if the move was aimed at keeping the Indian boys fresh for the World Cup, the source said: “Not just the likes of Rohit, Bumrah or Hardik. We have the likes of Quinton de Kock, Lasith Malinga and other players as well who will be playing the World Cup. The idea is to manage their workload in such a manner that they can give it their best when they play in the showpiece event. While the foreign players have mostly gone to Chennai directly and are enjoying there with their families, the Indian players have headed home.”

Speaking at the end of the last India game – against Australia at the Feroz Shah Kotla – Kohli had said that while asking the boys to enjoy the IPL, he had also asked them to be smart with managing the workload.

“What we spoke in the dressing room was go and enjoy in the IPL these two months. Must enjoy ourselves and play because we enjoy the game. Being on the road for so long does take a toll, but when there is a long season, you can reflect on it. I think it has been a hectic season, but we are proud of how we have played. Guys have come around and shown character. All of us deserve to go into the IPL and enjoy ourselves. Everything will be taken over by the World Cup when it comes to the tournament.

“We have discussed workload and asked the players to be smart and inform the franchises. All the workload will be monitored and the players will take the opportunity to take breaks. We will be committed to play the IPL but the world cup comes once in four years. Everyone is comitted the World Cup and want to be a part of the bus,” he had said.

Clearly, the MI management is doing its bit to ensure that the players are fit and raring to go when they set foot in England for the World Cup. 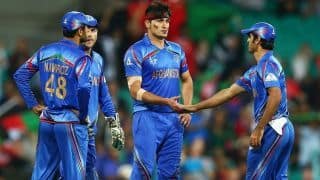